In China, architectural styles and scales are as diverse as the country itself. China’s architectural obsession extends beyond the skyscraper, as the country indulges in some of the world’s most bizarre designs: from the ultimate kitsch hotel to a town that tries to capture the essence of Britain, China is a playground for experimentation, here’s our guide to 10 of its most fascinating buildings.

China’s obsession with imitation has resulted in the construction of three Eiffel Tower inspired structures and an incredibly precise scaled down version of the Sydney Opera House. Sparking much debate around architectural licensing and the battle between stealing designs versus borrowing, these structures nevertheless contribute to the varied character of China’s undulating architectural landscape.

China‘s mimetic tendencies have been realized on a large scale to include entire neighborhoods, as towns such as the fake British ‘Thames Town’ and Austrian village Hallstatt are popping up around the country. As London cabs drive past the Tudor, Georgian and Victorian buildings lining the streets of Thames Town, the amalgam of architectural styles, cultural stereotypes and British nuances attract brides and grooms wanting a novel backdrop for their wedding photos.

Very much an acquired taste, the unusual aesthetic of The Beijing Tianzi Hotel is known for being China’s largest image building, as well as winning multiple awards for being the world’s ugliest building. The building has received attention due to the three huge mythical gods which make up the hotel’s unique and unmissable facade.

Designed by architect C.Y. Lee, the Fang Yuan Mansion Shenyang is a mixing pot of ideas and cultural influences. The architect attempts to bridge Eastern and Western styles as he manipulates glass, steel and concrete into the shape of a traditional Chinese coin. As modern meets traditional and East meets West, the building’s unavoidable character has seen it make regular appearances at the top of numerous ‘world’s ugly buildings’ lists.

The Wuliangye Group not only brew their ‘magic’ liquor with traditional Chinese techniques but do so within a giant replica of a Wuliangye bottle. As much a part of the Chinese culture as part of the Chinese skyline, this iconic building attracts tourists who can’t resist either version of the well-loved alcoholic beverage.

Chinese architecture is famed for its bold, powerful statements which push scale, albeit usually vertical, to the extremes. However, China now boasts the world’s largest building in terms of volume, able to hold a staggering 20 Sydney Opera houses. Inside the massive complex visitors can find a shopping center, a university complex, a Mediterranean village, and an IMAX theatre. This architectural giant can be interpreted as an unsubtle statement of the country’s current economic power, as it points towards its future global position.

Architecture firm Shanghai Modern Architectural Design Co. are responsible for designing a selection of the most distinguishable structures in China, the Oriental Pearl Tower, and Circle of Life being two of them. The latter is an emblematic structure which welcomes people into Fushen’s new town. Rising above the city, the Circle of Life stands at 50 stories and includes an observation tower in its upper decks. Illuminated at night by over 10,000 lights, the structure is a distinctive addition to the city’s skyline.

Famed for her unpredictable temper and futuristic curves, Zaha Hadid‘s architectural presence in China has been so pervasive that her structures here now number in the double figures. Soho Peaks is a multipurpose shopping and commercial complex split into three fluid, organic shapes which Hadid describes as partaking in a dance like an embrace. Situated between Beijing city and the airport, the peaks are to be the first thing people see when entering the city and the last thing when leaving. In true Hadid spirit, these iconic sculpture-like structures will reform the city skyline with a play on volume, light, and movement.

The Chongqing Guotai Arts Center has raised eyebrows due to its architectural interpretation of chopsticks and a hot pot, or a white fig tree depending on personal interpretation. The current structure is the result of countless changes which the architect has painstakingly undertaken over the past eight years. Facilitating shows, performances, and other artistic events the arts center is now an important cultural hub of Chongqing.

Architect Vincent Callebaut has designed Asian Cairns, an incredible feat of engineering which hopes to reorganize China’s urban system as well as the relationship between the country’s dense cities and its countryside. Six towers will be comprised of futuristic pebble shaped layers which appear precariously balanced on top of one another. Within each of these ‘pebbles’ are communities, orchards, farms and more, in the hope that all food and resources will be made within these vertical ecosystems to produce zero carbon emissions with positive energy. 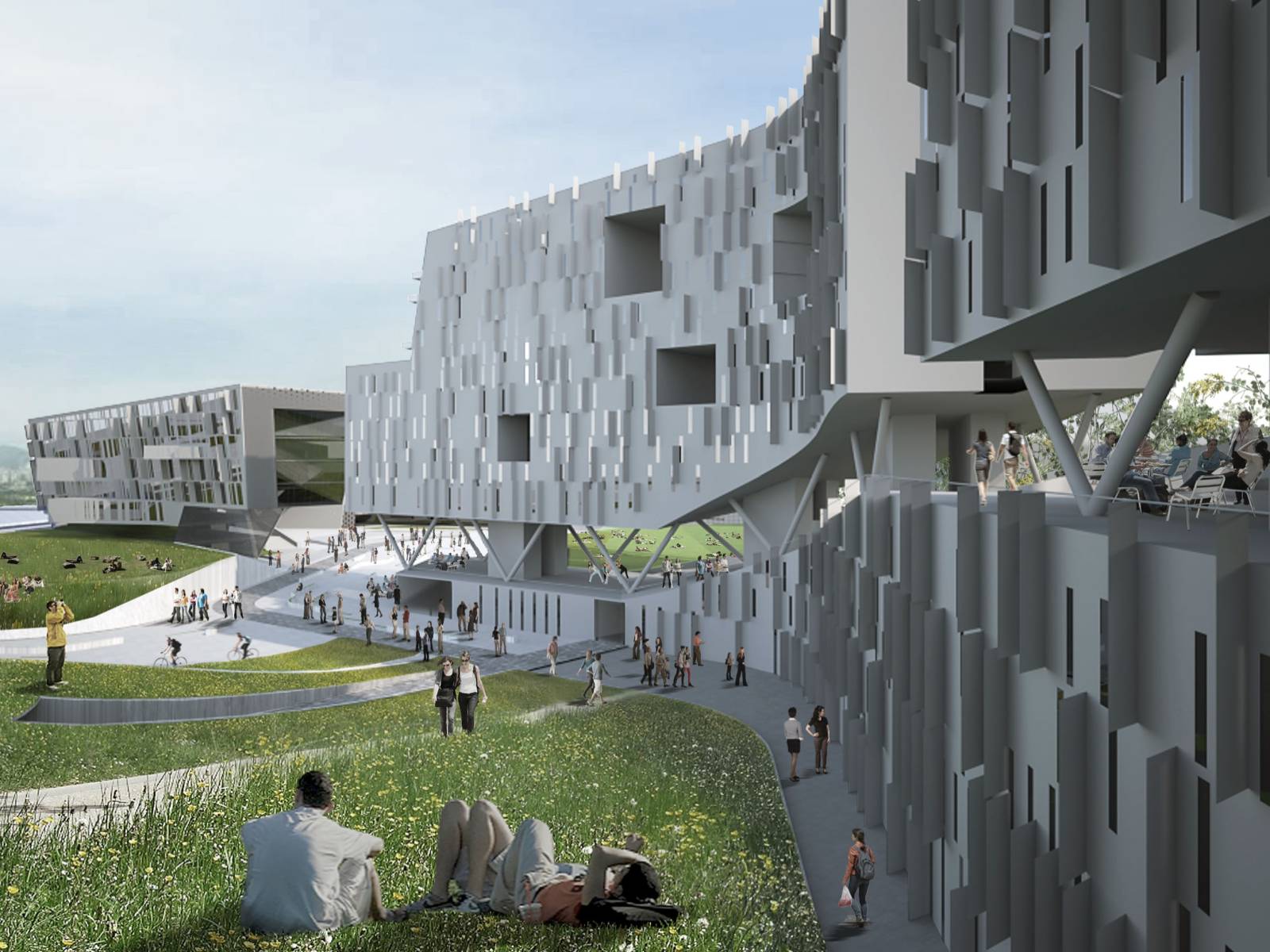