Huntsman Architectural Group has designed the new office space for New York City-based financial firm Lek Securities. The office is filled with art and has an amazing 52nd floor view of the city.

“Founded in 1990, Lek Securities is an independent broker-dealer and technology firm that executes and clears orders for professionals and institutional clients. For its new head office in New York City, the company leased 13,000 square feet on the 52nd floor of a downtown financial district high-rise. The firm’s founder and chief executive officer, Samuel Lek, asked Huntsman to design the interiors in a contemporary style, in keeping with the modern skyscraper that houses the company. Selections of Mr. Lek’s contemporary art collection play a key role in the spaces.

The core of this luxury office is the 3,000-square-foot trading workspace, where most of the 45 employees spend the majority of their day. Envisioned as a “living room,” the design emphasizes functionality. On one wall hangs one of graffiti artist Maximillian Wiedemann’s spray-painted Vogue covers, which Lek noticed hanging at the Bagatelle restaurant in the Meatpacking District—it turned out that the artist was having dinner there that night, and Lek bought it on the spot. A 500-square-foot data center supports the company’s proprietary electronic trading platform with multiple servers. Private offices feature Infinium metal and glass office fronts.

In the more public spaces, this luxury office design draws on aspects of hospitality design. The reception area features a sculptural custom coffee table designed by Huntsman and fabricated in an auto body shop. Color-changing LEDs wash dramatically over an etched mirror wall. Andy Warhol’s silkscreens of Queen Beatrix of the Netherlands hang on one wall. The terrazzo floor carries into the two conference rooms, which display Matisse prints.

The kitchen, which incorporates an existing mosaic tile wall, features several of Maximillian Wiedemann’s spray-painted portraits of presidents as depicted on American currency. Drew Tal’s Porcelain Promises hangs in the Lek’s office. Other artists represented on the premises include Alex Katz and Roy Lichtenstein. For his own home, Lek collects the work of Dutch old masters, but in his company’s head office, contemporary artwork enlivens the crisp, low- contrast spaces.” 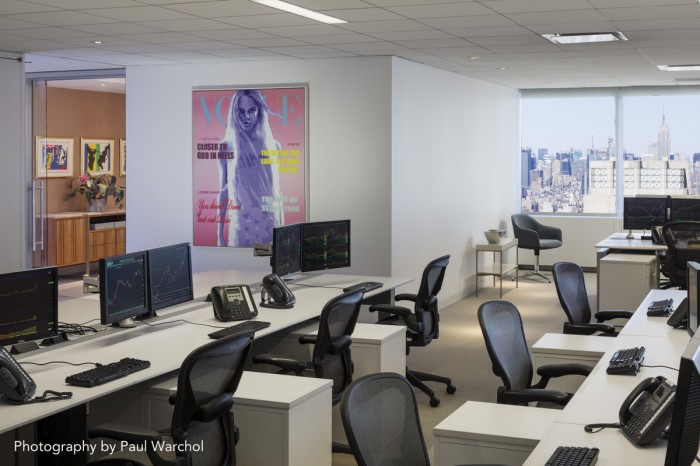 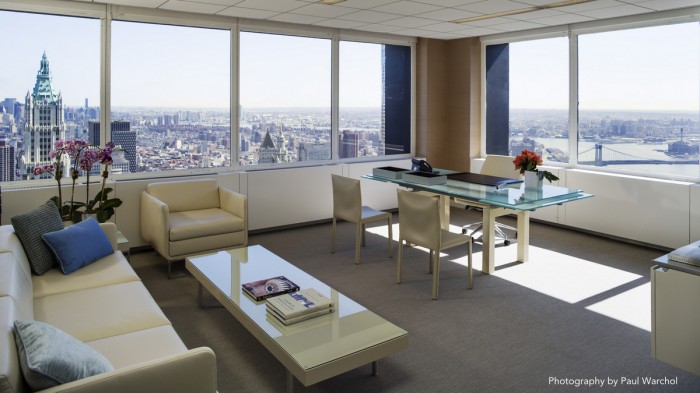 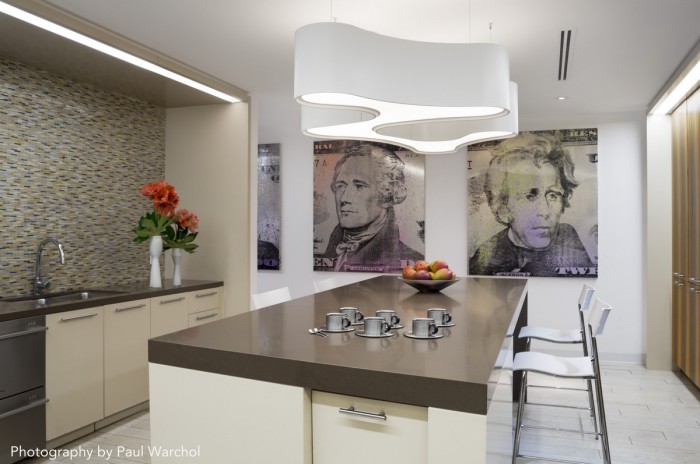 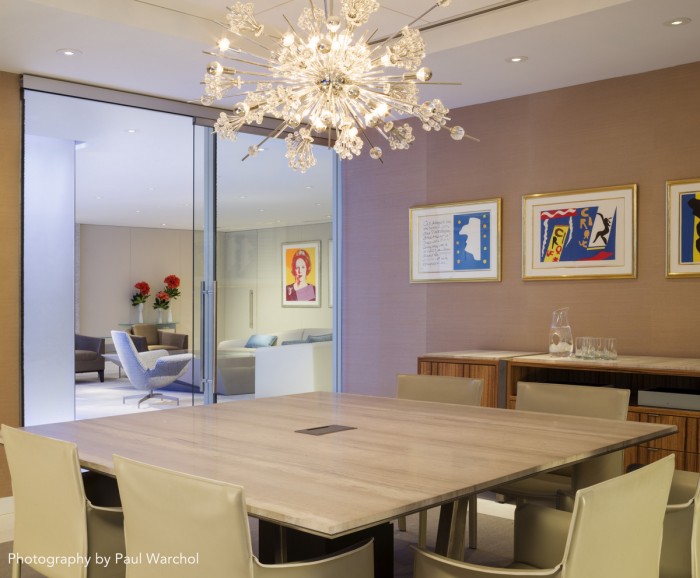 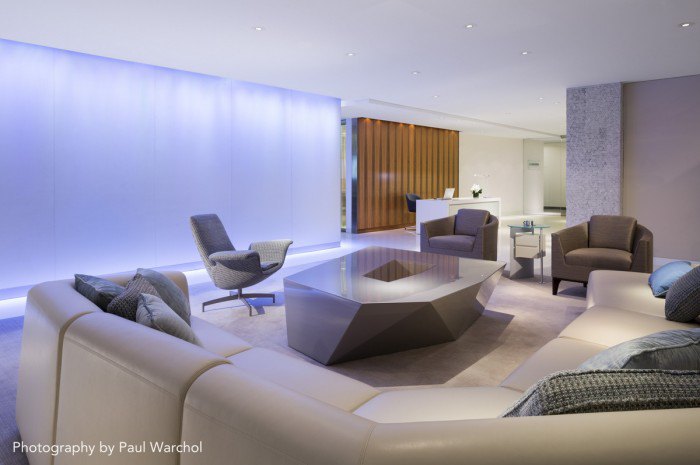 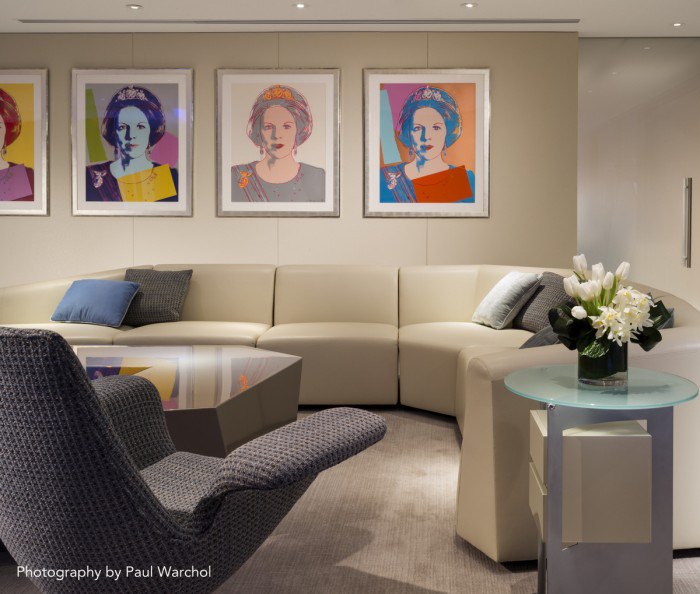 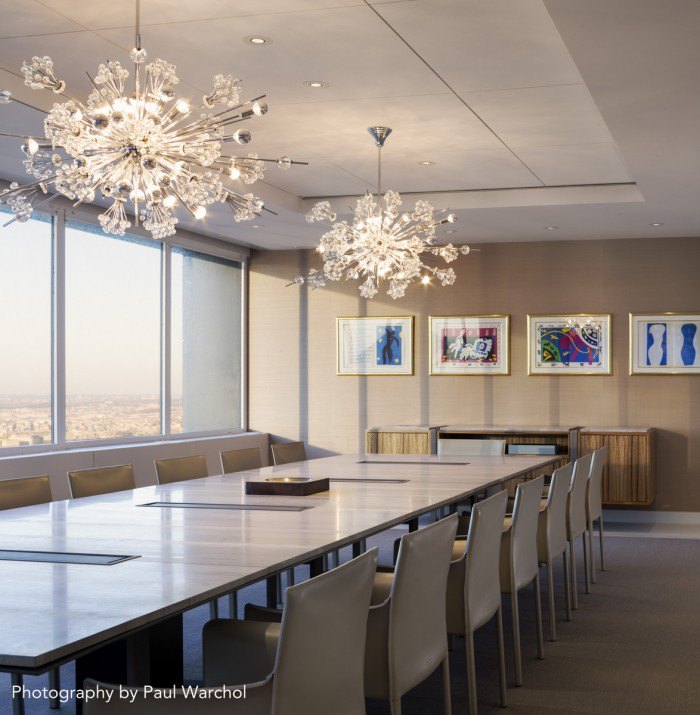 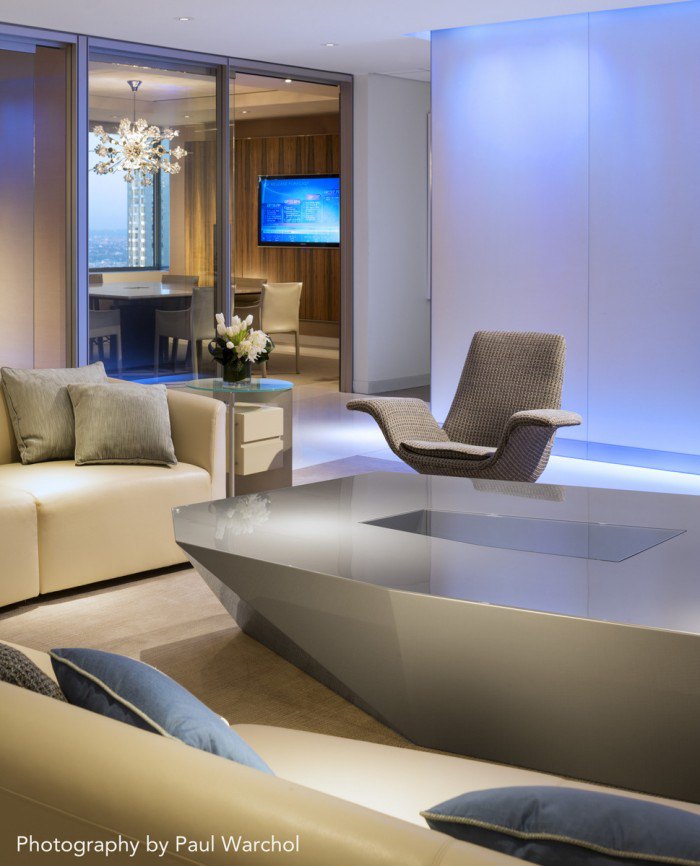 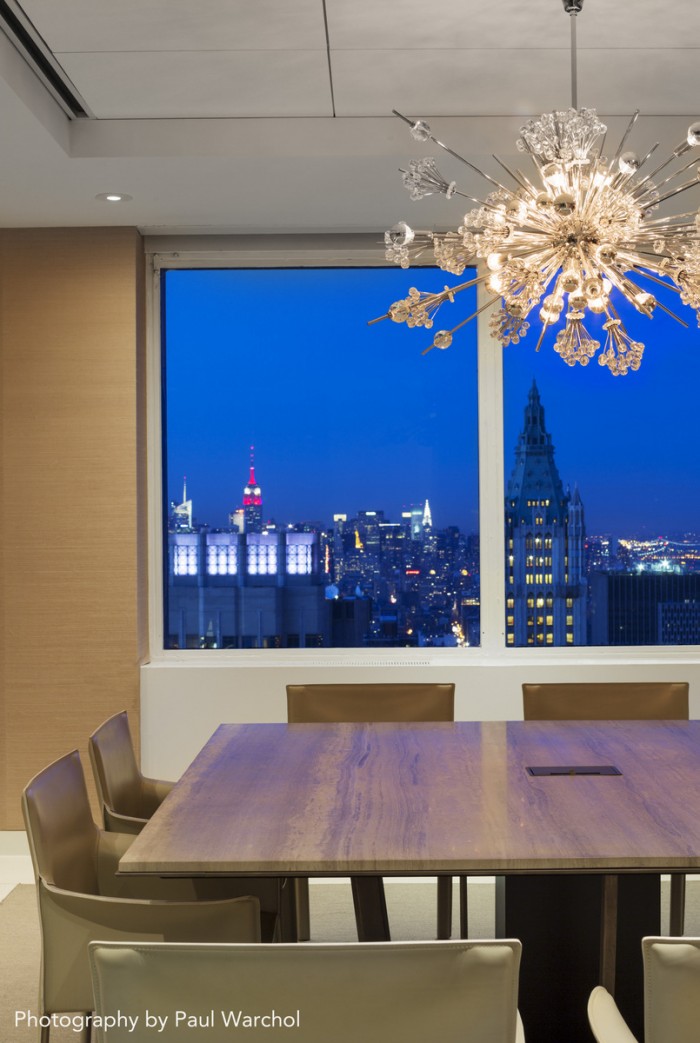 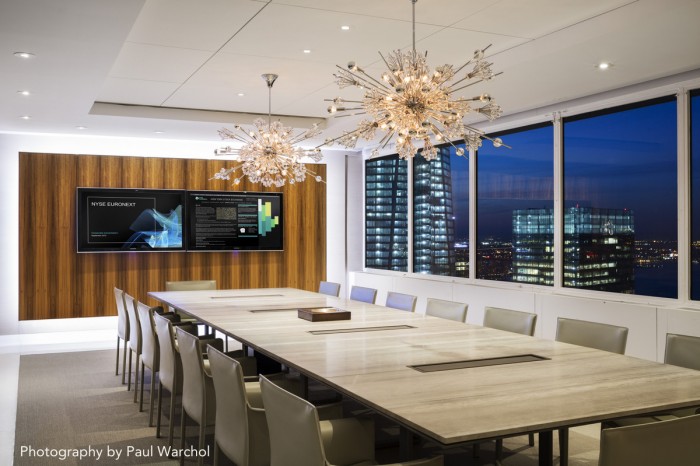 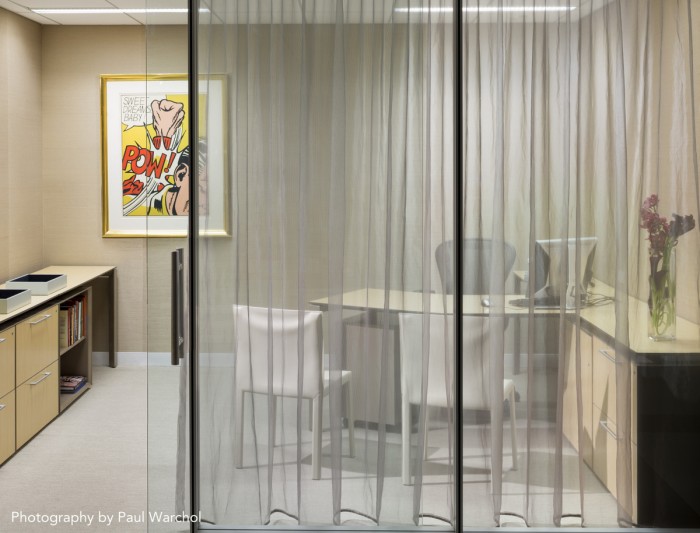 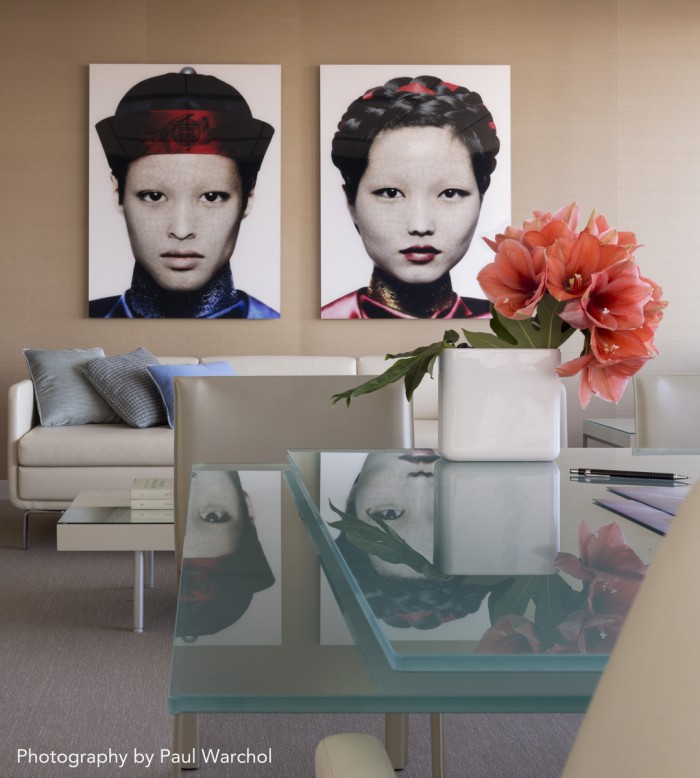 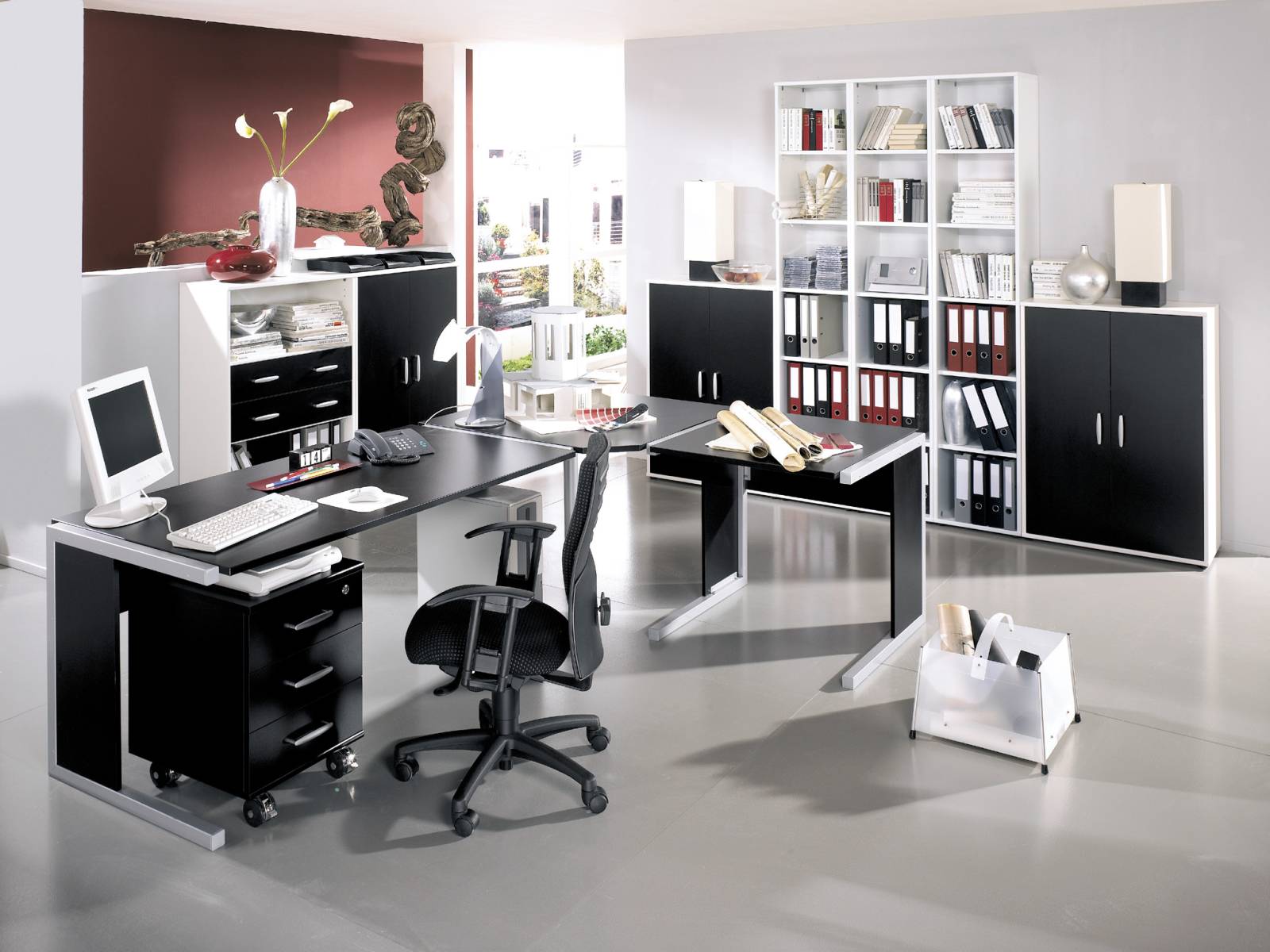 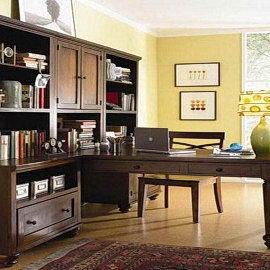 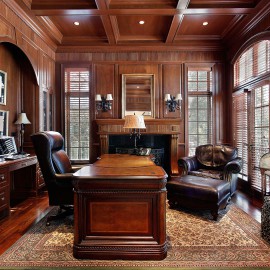 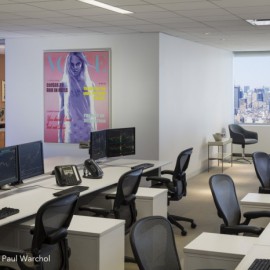 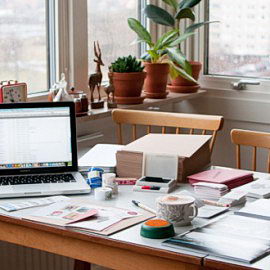